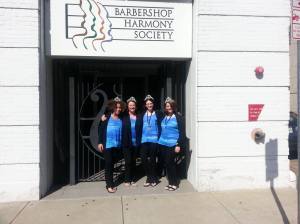 Thursday when we landed, we headed straight to the Barbershop Harmony Society headquarters. What a cool place. Even if you’re not a barbershop singer, you should definitely plan a visit the next time you are in Nashville. We took a tour to check out the really cool building, meet with staffers, and, of course, drop some cash in the gift shop! We loved seeing our coach (Richard Lewellen) and one of our close friends and arrangers, Larry Wright, on the “every man” mural. And before we left, we screamed a few tags in the “tag chamber.” Maybe not the best plan the afternoon before a recording session, but when in Rome…

So yesterday (Friday) morning, we headed to the Wright’s studio. We cannot say enough good things about the set-up of this studio. Barbershoppers, we’re talkin’ the Taj Mahal of four-part harmony recording. The idea is to keep the four individual voices in separate isolation booths so that corrections and post-production work is easier. But barbershoppers need to see each other…we play off of each other when it comes to emotion, timing, breathing, etc., etc. So the booths have several windows so you can see your sisters (or brothers) around you. It’s very cool and technologically impressive. 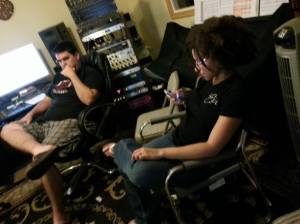 We also need to take a moment to talk about our recording engineer, Chris Wright. Seriously–this dude is very, VERY good at his job. He is worth every penny of our travel expenses. We can’t see him when we’re in our recording booths, but we hear him (and Richard) through our headphones and he navigates his space-aged recording software like nobody’s business. Richard says something like, “can we take them back two lines and have them hear that…” and within moments we’re listening to that exact spot. Chris is also a barbershop-brat so he has an amazing ear for things. We’ll be kicking along and he’ll say, “Hold on one second, I want to check the quality on the such-and-such part….” Besides the technical skills, he is super chill. He has the kind of personality you need on a project like this. There’s enough pressure in the situation, so you wouldn’t want a recording engineer without a high degree of patience! He’s a great guy. And since the quartet already has a Chris and a Kris, we’ve decided to distinguish by calling ourselves “Adams,” “Lewellen,” and “boyfriend.” It’s quite amusing when Richard refers to Chris Wright as “boyfriend.” Just sayin’.

We had a big, big plan for yesterday’s session and we didn’t get through all of it. But that’s ok! What did get recorded is very special. We never accepted “good enough.” We wanted every track to be awesome. We started with High Heeled Blues because Chris (tenor) and Anne (lead) needed something that wouldn’t be too high for first thing in the morning. We were having fun with a novelty song, so when that was done, we decided we’d do One More Minute next. With those out of the way, the voices were warmed up and feeling super strong so we moved on to a ballad– For All We Know. This is one of our favorite songs and it’s like riding a bike. Still, we took a lot of time to make sure the quality was reflective of our best performance ever. We spent the afternoon working on Cruella (soooooo fun!) and Cry Baby.

Here’s something interesting we learned…. flexibility is key. We have a new tune that was arranged for us by Richard, Jar of Hearts. It’s a contemporary piece that we’ve kicked around here and there pretty much since we got together. But we have only had the official, final chart for about a month. Still, we love it so much, that we’ve been working it so that we can share it on the CD. We started to record it yesterday and all it took was one run-through to know that we just weren’t feelin’ it. It was a bit rattling, to be honest, but we shook it off quickly and just decided to move on. We’ll come back to it today (Saturday) and see if it clicks a bit better.

Well, it’s time to get ready and head back to the studio! We’ll add pictures later … and keep an eye on our Facebook page because we’re posting some there: http://www.facebook.com/epicquartet.

Wish us luck!!! Well, maybe you should save your luck and prayers for “Boyfriend Chris.” He has gotten a big, fat dose of Epic this weekend, and that poor man is probably going to need a nap once we leave the state!

One thought on “Recording Journey, Part 3”